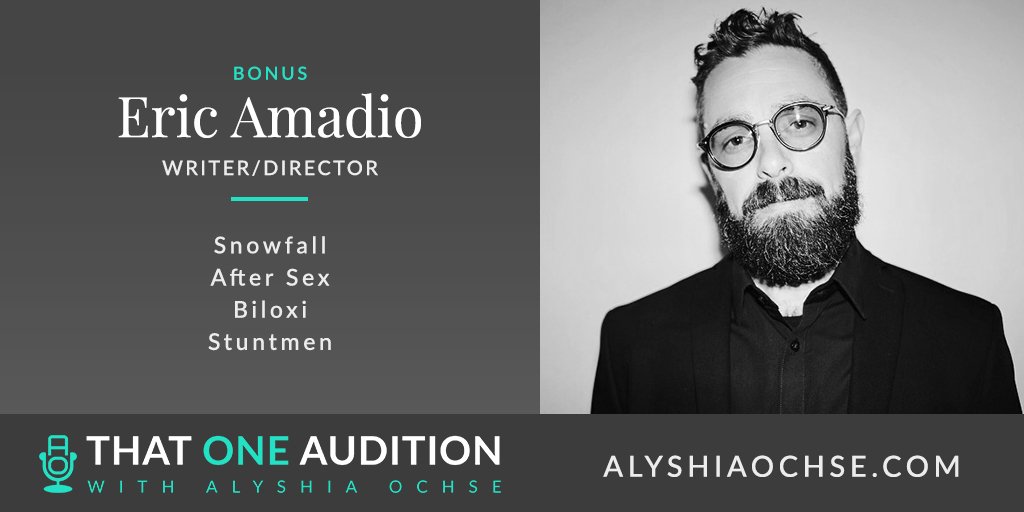 For today’s bonus episode, we’re talking with writer/director Eric Amadio—if you’ve not heard of him, you’ve likely seen his show SNOWFALL on FX, or at least spotted the billboards around the town. His fascinating story takes all kinds of unexpected turns—from writing haikus as a child to getting published at 10 years old, from electronic music producer to rapper to director, and now show creator—Eric has worn many hats and has accumulated some fascinating perspective along the way.

We take a deep dive into how his process works, how he writes and manages his approach to production, and what he’s observed about creativity in our rapidly changing modern culture. He is motivating and inspiring, and whether you’re an actor, writer, or director, his insight will lead to some pretty powerful revelations about story structure, character, inspiration, and patience!

Eric Amadio is a writer, director, and producer, known for Snowfall (2017), After Sex (2007) and Stuntmen (2009). Born in Southeast Los Angeles and raised during the height of violence in the crack-fueled 80’s and 90’s, Eric had his first essay published at the age of 10, went on to write for local music publication Rock City News at 16, then worked as an electronic music producer/DJ from ages 18-23 before beginning his career in film and television. Deeply rooted in Los Angeles, his grandfather opened one of the first Italian/American owned photo studios in Downtown LA in the 1940’s, his mother grew up in the middle of the 1950’s car-culture in Bell, and Eric’s formative years were spent immersed in the various 80’s/90’s subcultures of hip hop, skateboarding, basketball, and crime, all elements that can be found in his work.

“I would love to see real story-tellers re-embraced. We live in this weird time right now where the corporate mentality has taken over the studio system–which is mitigate all risk.”

“A lot of times it’s not about talent, it’s not about vision, it’s just process. Sometimes you just need the extra day or two, or extra year or two to grow as a human so that you’re seeing certain things within a story or within a character.”