Joy Bryant was born in a modest home in The Bronx, New York and as a young woman, was enrolled in an inner-city outreach organization called “A Better Chance,” designed to encourage minority talent. Joy was also blessed with brains as well beauty and remained an excellent student throughout her high school years. As a result, she was awarded a full academic scholarship to Yale University.

While enrolled as a full-time student at Yale, Joy was discovered by a modeling scout from Next Models Management and subsequently pursued a career as a fashion model in Paris. Her slender yet classic beauty got her an exclusive contract with prestigious brand names such as Tommy Hilfiger and the Victoria’s Secret lingerie catalogue.

Joy’s acting debut came about in 2001 in Robert Townsend‘s Carmen: A Hip Hopera. An MTV production, the film also starred Beyoncé and Mekhi Phifer, along with several hip-hop superstars. After a small role in the Eddie Murphy action comedy Showtime, she made her big breakthrough in Denzel Washington‘s directorial debut, Antwone Fisher. In 2003, she co-starred with Jessica Alba in Bille Woodruff‘s romantic drama Honey.

Most notably, Joy is known for Jasmine on 6 seasons of PARENTHOOD and Amazon’s hit show GOOD GIRLS REVOLT.

Tune in to hear how Joy handled the transition of brains to beauty and what ultimately drew her into acting. 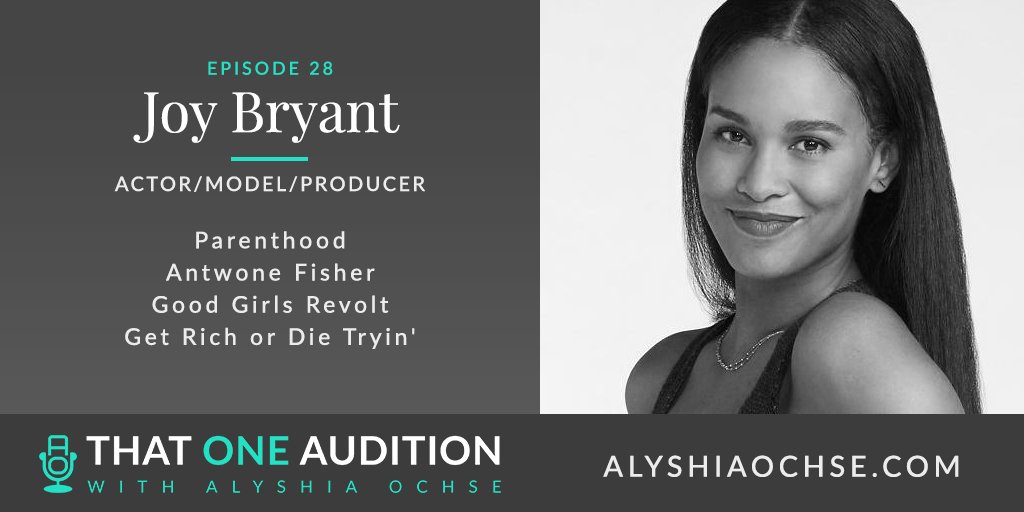 “I don’t want years to go by and think I woulda, shoulda, coulda.”

“Acting felt good enough to be curious about it, but I was completely terrified.”

“I’m on this wave and I’m not really knowing how to surf it, but I haven’t been knocked off it yet.”

“I walk into the casting session and Denzel is in the room and I lost my mind. I was totally losing my mind.  I was tripping.”

“If it was just about who was the best actor most people would not have a career.”

“Skill wise, most people would not have a career.  There are other factors involved in why and who gets a job.  Other factors that have nothing to do with you.”

“Whether or not you get a job is beyond your control.  All you can control is what you do when you go into the audition room.”

“We are looking for moments in an audition.  We are not looking for a fully realized character.”

“Being nervous or doubting yourself is not a quality that you just have at the beginning of your career.  It happens and fluctuates throughout your whole career.”  | CLICK TO TWEET

“We were in the most incredible acting class with Denzel Washington.”

“Denzel was able to say the most in directing with saying the least amount of words possible.”

“Dig your roots down deep and hang on because you are not trying to be the leaf you need to be the tree.”  | CLICK TO TWEET

“Your sense of self can’t be connected to your career.”

“Education was my ticket.  It expanded my horizons and experiences.”

“I didn’t get to study the stars in astrology, but I ended up among the industry in the stars.”