Samm Levine’s first breakout role was as a member of the “geek” half of the short lived cult hit, Freaks and Geeks. The following year, he rejoined “Freaks and Geeks” producer, Judd Apatow, for another widely praised coming of age series, Undeclared. That same year, Samm made his feature debut in the raucous teen spoof, Not Another Teen Movie.

Since then, he has appeared in over 60 films and television shows, including the Oscar winning Quentin Tarantino epic, Inglourious Basterds, and in many memorable roles on beloved programs such as Entourage, Modern Family, NCIS and How I Met Your Mother. In addition to his growing catalog of television appearances, Samm is also known for roles in many cult features, including the Broken Lizard comedy, Club Dread, the sci-fi thriller, Pulse, and acclaimed indie comedies, Drones and IFC’s Made for Each Other

Samm has also served as co-host and producer to Kevin Pollak’s renowned celebrity talk show, Kevin Pollak’s Chat Show, since its inception in 2009 – a role he came into after his interview as a guest on the first episode. 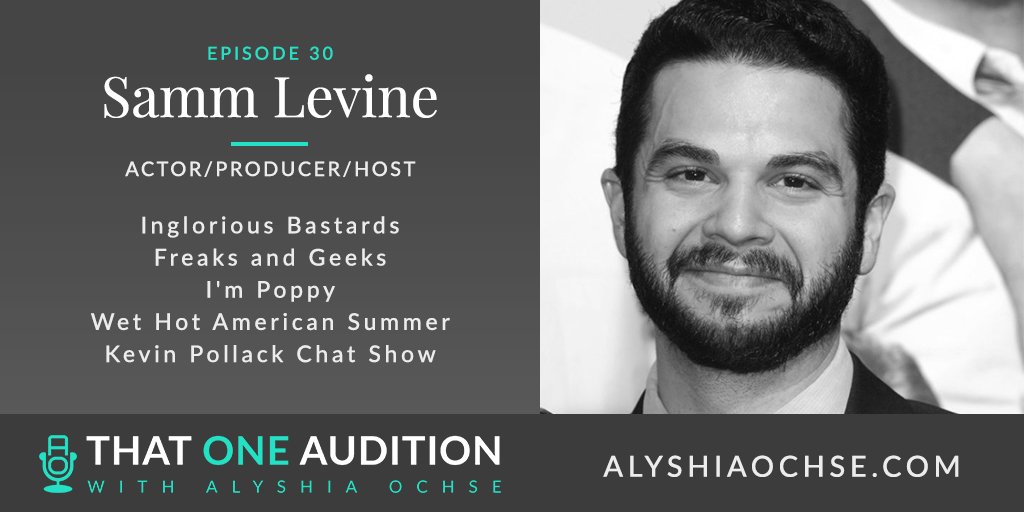 “Always say sure, you never know where the project may go.”

“Sixteen year journey to finally get Arty on camera with my face.”

“I memorized every single word of Platypus Man at 11 years old.”

“All my fellow classmates asked me to MC their Bar and Batmitza.”

“One Barmitzpha, Lisa Kudrow asked if I was a professional standup when I was 12. She encouraged me to become an actor.”

“Mom, Lisa Kudrow from friends said I should be a professional comedian.”

“I said yes to everything right away.”

“What got me into the room for Freaks and Geeks is that Judd was specifically looking for unknowns.”

“My Mom suggested that I do the William Shatner impression during my Freaks and Geeks audition.”

“Judd put me on the callback list for Freaks and Geeks solely so that Paul Feig have a laugh at my William Shatner impression.”

“I learned how set acting worked on Freaks and Geeks.”

“Secret to success in Hollywood is a short memory.” Ingrid Bermund “I have found that to be remarkably true” | CLICK TO TWEET

“Acting is like solving a math problem. As long as the end result is the same, you are never going to be asked to show your work.” | CLICK TO TWEET

“I love the opportunity to do drama.”

“I knew from Judd that Quentin was a Freaks and Geeks fan.”

“Reservior Dogs was a very important film in shaping my view of filmmaking, acting and adulthood.”

“When Quentin makes movies, he is a kid in a candy store.”

“When you read for Quentin, you don’t read for him, you read with him.”

“Before I left the audition, I swollowed my pride and said to him working with you is one of the most important things that I would like to accomplish in my life. There is no pride here, if I can be an extra and carry I gun. I will do it.”

“I was not going to walk out of my audition with Quentin without leaving everything on the table.”

“I still think working with Quentin was a dream.”

“The bulk of what I shot ended up on the cutting room floor.”

“This is a business and the last 10 years after the writing strike, network and studios do not like taking risks.”

“My issue is with the business model of the studio system.”

“I’m Poppy is the strangest thing I’ve ever done. It is decidedly odd.”

“I got away with a lot when I was doing stand up as a teenager because there was an element of strange to it.”

“I’m also producing now because I was getting really frustrated from wonderful scripts not getting made.”

“Outside of any acting talent I possess the great skill is the amount of contacts I’ve made over the years.”

“The first few jobs you do as an actor might not be that great but you are doing them to build a resume.”

“Producing has given me a greater appreciation for how easy actors have it.”

Leave a Reply
You might also like
One of the following
Tamara Taylor
S2 029: Scoot McNairy
S2 018: Malin Akerman