Sean Carrigan is a former professional boxer turned stand-up comedian, actor and producer. Sean has appeared in numerous films, television shows and commercials, including the television movie, “Call Me Crazy,” starring opposite Oscar winner Jennifer Hudson and directed by Ashley Judd. He has guest starred in the series, “Modern Family,” “The Closer,” “Hart of Dixie”, “The Event” and “The Young and the Restless.” Carrigan appeared in the Tyler Perry film, “Single Mom’s Club,” where he played the love interest of Wendy McClendon-Covey, and in the romantic comedy “Strangely in Love,” directed by Sundance Award-winning director Amin Matalqa.

Sean is also a comedian and co-founder of the production company Woodhead Entertainment, which focuses on original shorts, branded media and feature films. With Woodhead Entertainment, Carrigan contributes as both a producer and actor. His comedic performance as Brett Favre in the viral parody hit, “Brett Favre: Rise – What should I do?” gained over 4 million online views and has garnered him great reviews. Carrigan can be seen doing stand-up comedy all over Los Angeles and in other cities in the US and Canada.

Currently, Sean is Stitch on “The Young and the Restless” and Coach Rafferty on the Critics Choice Nominated hit Netflix original show “American Vandal”. 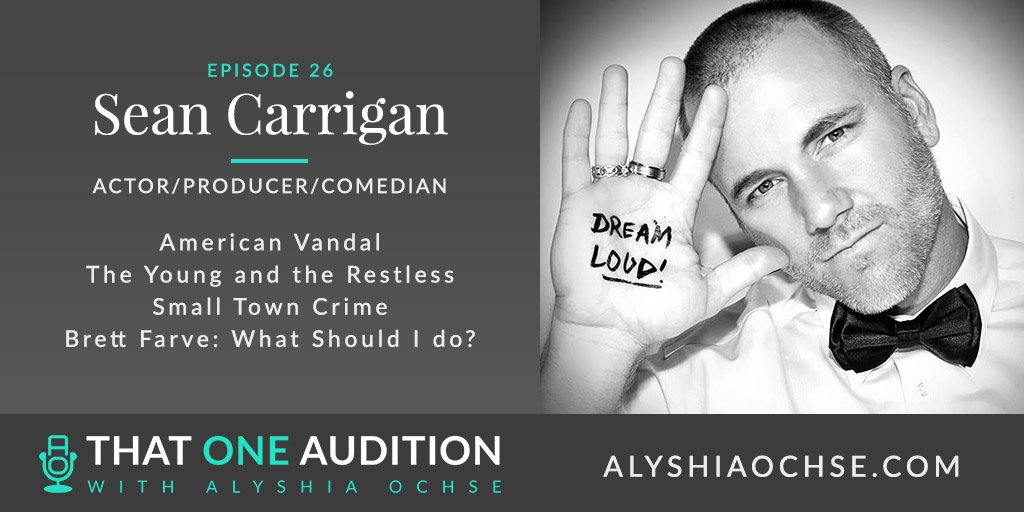 “Put Down My Boxing Gloves and Picked Up My Heart. How Comedy Led Me To embrace my failures.”
“Stand up comedy turned my acting career around and changed my life.”
“Doing stand up comedy gave me a different way to look at things. I was able to laugh at my failures.”
“Read Steve Martin’s book BORN STANDING UP and learned that he had bombed thousands of times. There was something inside me that said I had to try.” | CLICK TO TWEET
“I have this need to get on stage and be heard.”
“There is something about this thrill or rush, you either win big or get your ass beat.” | CLICK TO TWEET
“No matter what, you have to be easy to work with and bring something to the table.”
“There is no experience like EXPERIENCE.”
“Get up on stage and know that you are going to bomb.”
“In Stand Up, you have about 30 seconds to a minute to let the audience understand that they can trust that you know what you are doing.” | CLICK TO TWEET
“I don’t censor myself but I try to stay true to what is me.”
“I’m good at making fun of myself.”

Leave a Reply Cancel Reply
You might also like
One of the following
090: Beau Garrett
085: Erin Cummings (LIVE From LA)
073: Chris Geere